[Infographics] A Marketer's Glimpse Into China | EYE ON ASIA

China is a vast country consisting of 23 provinces, five autonomous regions, four direct-controlled municipalities, and two special administrative districts. With a population of more than 1.35 billion people, it is well known that there are significant differences in characteristics across regions and generations.

With a population of more than 1.35 billion people, it is well known that there are significan differences in characteristics across regions and generations.

The 'Middle Kingdom' is known for its large land mass and huge differences among its varied and far-flung regions. The population is expected to exceed two billion by 2030, due to the recent change in China's one-child policy, industrial and economic development, as well as other important factors.

A Glimpse Into China Infographic 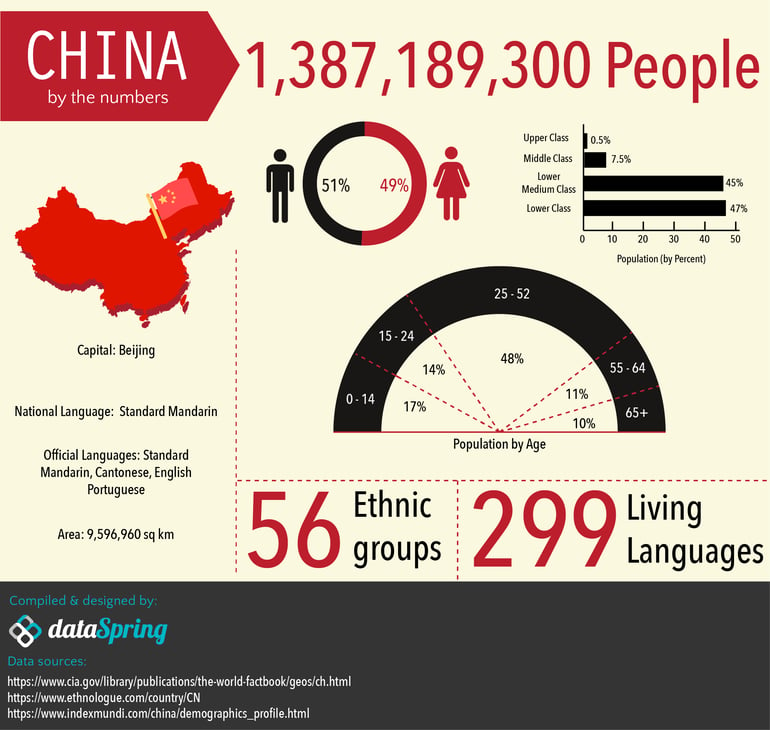 Within the past 30 years, China's social structure has experienced many changes. Considering this, each generation is very different from the last. Consumption trends and consumer attitudes differ greatly given the collective experiences of each generation.

Without experiencing the same struggles of generations before them, the 'post-90s generation' is seen as lazy, promiscuous, confused, selfish, brain damaged, and overall hopeless. As they mainly enjoy spending their time connected to the internet, many domestic companies are making a shift towards online ads in order to effectively reach this demographic.

Mainly shaped by the Cultural Revolution, this generation lived through an age of instability and uncertainty regarding the future of China. Because of this, they are highly focused on family and are known to be more conservative.

60's Generation and before

As they were greatly influenced by the Cultural Revolution, consumption tends to be perceived as 'evil'. Known to be a very realistic generation, many strongly desire safety and security.

If you're a marketer wanting to do business in China, you'll need to understand the tier classification that is used to classify Chinese cities. Tiers can be utilized by researchers and businesses to better target and study consumers by income level, GDP rate of their city/area, population, etc. This enables the ability to fine-tune marketing strategies to local conditions. There are 163 cities in China which are divided into four tiers as discussed in a previous blog post.

While the Tiered cities definition is constantly being reviewed, this information, combined with the other data provided in this article, can certainly give the marketer, researcher ,or business wanting to do business in China a leg-up on the competition when it comes connecting to consumers in this tremendous market.

The cost of living in China is relatively low. However, depending on the income level, the attitude towards consumption is greatly different. It is important to develop a marketing strategy that is appropriate for each segment.

The top (less than) 1% of the population. A current issue in China is the ever-growing gap between the classes. This being the case, the upper class is often a target for complaints. Holding one-third of China's wealth, this group is known for an extravagant lifestyle and luxury at any cost.

Consisting of approximately 7.5% of the total population, China's middle class is known to have a monthly household income of 3,500 RMB to 15,000 RMB. People from this class are concerned about their savings and will usually limit themselves to spending 35% of their income on non-essential items.

Distributed between the urban areas (470 million people) and rural areas (130 million people) of China, they make up about 45% of the total population. The monthly income for this group of people is around 1500 RMB with a disposable income of about 600 RMB per month per person.

Making up about 47% of the total population of China, the lower income class is distributed between the urban (120 million people) and rural areas (500 million people). They have a monthly household income of about 500 RMB and a disposable income of about 200 RMB per month per person. It is also important to note about 90 million people (~14.5%) from this class are categorized as the “very poor class."

As shown in the annual Survey Report by the China Internet Network Information Center, China has been experiencing a steady and fast growth of internet users and mobile internet users in the past few years. Especially in the mobile market, many companies are opting to use their marketing channels on social media like WeChat, more so than their own mobile websites.

Brands looking to enter China should carefully consider the channels they will use in order to maximize marketing ROI. Though the internet and mobile market growth rate is steady, companies should also consider those offline, who will be visiting physical stores. There can be pros and cons for both channels - ask us about it!